Bards don't snowboard, you know. I mean, when was the last time you read a fantasy novel where-in the bard of the story strapped his lute to his back, found a plank to stand on, and hit the slopes?
Never. You've never read one.

They wander and they contemplate the secrets of the universe. They transcribe said secrets into riddles and poems, songs and parables. They take their time and meander toward whatever topic peaks (the verb, not the noun) their interest at the time, preferring to elevate their mind rather than swiftly descending their physical being into valleys, whether physical or allegorical. Bards chase wisdom and spend time sharing it with anyone who has a mind to listen.

Yesterday though, I decided to challenge the stereotype. December 16th, 2018 was an important day for multiple reasons. First, I had the opportunity to introduce the Gypsy to one of my very few consistent and unconditional friends. Secondly, because instead of introducing them at a restaurant or cafe like any sane person would do, we decided to meet at the top of a mountain that we would later slide back down. For me, a good portion of that slide would be spent on my buttocks.

It was Amanda's second day off work since Thanksgiving (because December is an incredibly demanding time for USPS workers) and our original intent for the day was to sleep in as long as we could, and then go back to sleep for a few more hours afterward. That was until I mentioned in passing that one of my old friends of the Intelligence Community was going skiing that weekend. Amanda knew of Lisa because she'd recommended me for a position recently with her company, and we'd spent a couple of hours on the phone discussing it and reconnecting. I knew Amanda had snowboarded in the past, but had no idea that she would instantly demand that we drive three hours both to meet Lisa and to join her on the adventure. It would require that we wake up at 5:30 AM after she'd worked non-stop for weeks, but that didn't even seem to phase her. She drug her gear out from the closet we'd stuffed it into during our summer camping excursions, and was soon trying everything on and showing me the basics on our living room carpet. Push your butt out. Put your weight on the front of the board. Dig your heels in. 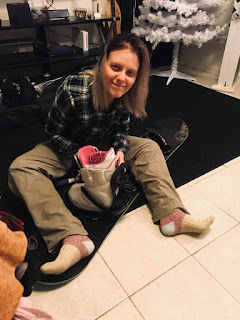 We kept an eye on the weather throughout the week, and made a trip to REI knowing that we'd spend too much money as we do each time we shop there. I bought a KÜHL sweater (please, somebody understand my subtleties), and Amanda surprised me with an early Christmas gift of winter hiking boots. I also opted for a pair of rain pants, which I perceived as more versatile than the ones designed for snowboarding specifically. They were about half of the price and I figured I would also wear them for future snow hikes, so after nearly an hour of deliberation, that's what I went with. It's a good thing I did, because the weather turned out to be rather disgusting.

When we arrived on Beech Mountain Sunday, I could barely see the road in front of me. It wasn't raining per se, but it was so foggy that water would soak your clothes after only a few minutes outdoors. We gave Lisa a heads up on the weather, and she suggested meeting for breakfast at the Sunrise Grill in Boone, NC. She and her husband had eaten there before, and she thought we'd be impressed. She was right. I ordered Cranberry Walnut french toast, and Lisa and Amanda both had eggs benedict. They got along instantly, and Lisa noted that I looked happier than she'd ever seen me. I responded that it was because I was happy for the first time since she'd met me. Historically, I'd always had my interests...duty, sacrifice, honor, and the like. But I'd never been relaxed and content with life like I now feel. I never project my happiness as someone else's responsibility. It isn't meeting Amanda that made me happy, it's the fact that I learned how to be authentic with myself and to interact with the world in an authentic way. That said, Amanda does certainly enhance and enrich that happiness by sharing my interests, outlook, and goals. My life is more fulfilled with her than it could ever be without her, and I'm enormously thankful for her presence both in the good times and during my struggles. 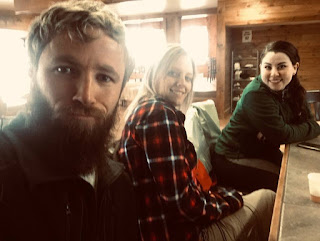 We had an excellent breakfast and discussed our various adventures (particularly across the Southwest - Lisa received an even less censored version than what I write in the blog), and then drove up to the Beech Mountain pub. We'd hoped the weather would improve during breakfast, but since the pub was virtually empty it provided a nice place to warm up and continue our conversation. After we'd been there for a few minutes discussing the important issues of human existence, a man came in wearing ski boots, ordered a beer, and proceeded to fall flat on his ass on the way back to his table. He lay there groaning for about half a second before he said, "I'm okay! Just really embarrassed - please, nobody look at me!" I commend his handling of the situation. Before he'd fallen, I was observing his social anxiety in his interactions and mannerisms, but it seemed that once he'd achieved the worst case scenario, there was nothing else to worry about. It reminded me of being so depressed that I didn't want to exist any more, and how that "absolute bottom" had driven me to be fearlessly authentic. My life has improved beyond measure since then, so if anyone is at their all-time low, know that it is that sort of pressure that inspires and incites change. Embrace it.

We had a couple of beers and eventually decided to brave the miserable-foggy-slushy weather and hit the slopes. I rented snowboarding equipment, and took a little conveyor belt to the top of the tiniest little bunny slope - fell on my butt quite a few times. It was totally exhausting at first, trying to figure out how to drag the board along with one foot buckled. I learned that essentially everything Amanda had told me was correct, but I'm more of a feeler than a rationalist, so I had to just let it happen. We went to our first real slope - riding the lift was pretty awesome, though I was intimidated by the lack of any sort of restraining device. Apparently you have to slide off of the lift as well...there's no pause in the motion. I did surprisingly well at that. The problem with me is that, as a deeply idealistic and philosophical person, I believe that humans should carry themselves with poise and dignity. It is absolutely impossible to look dignified or elegant when you're sliding down snow for the first time. You try hopping, sliding, scooting, or whatever else you have to do in order to go the direction you're aiming while your feet are fastened to a board. Toward the end of the day I felt rather fluid, but by that time I'd also scraped my hide a good two dozen times. That said, the overall experience was SO FUN that I will undoubtedly by investing in some gear of my own.

If you're going for the first time, you should prepare to be disheartened at the fluidity not only of your more experienced group members, but of a dozen five year old kids who can literally ski circles around you. As the day ended, we had a quick dinner of coffee, wings (me, always), and burgers. We agreed to meet up again and I vowed that, as in all things, I will be better in my future endeavors than I was in the past ones.

Mahalo for the invite, Lisa! Thank you for meeting my human. It was really an honor to be authentically happy in front of you, because you've been with me through a metric butt-ton of mental and spiritual battles. To be surrounded by people who love you unconditionally...what more can anyone ask for? Snowboarding was exhausting for the Bard, but amazing rest for his soul. 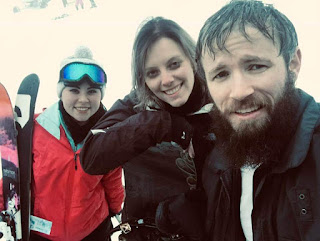